Puppeteers of Puget Sound: Become a Member, or Renew

GREETING FROM YOUR GUILD!

September is the month to renew your membership to the Puppeteers of Puget Sound and the Puppeteers of America. This email is a reminder notice to all officers and individuals that your tax deductable membership fee is due. Join our guild and become a member of a region rich with puppetry activities you can learn about at our website: puppeteersofpugetsound.com.  If you have news to share about your latest puppet show, or have questions about Puppeteers of Puget Sound, please contact our Webmaster, Alyssa McFarland.

We are lucky to have two leaders from the Puppeteers of America in our guild, Nick Hubbard and Elly Leaverton.  Here is some news from them!

“Hello puppeteers in the Pacific Northwest!
The last few years have seen some exciting things for local puppetry.  In 2010 our guild hosted the Regional Festival, Puppet-o-Rama, which was well attended and generated considerable buzz both here and nationally, including a lengthy and appreciative article from The Stranger.  The Northwest Puppet Center was chosen as home for the fantastic Cook/Marks collection of 5,000 puppets.  We’ve had artists doing work at venues like On the Boards, Washington Ensemble Theatre, and the Lee Center for the Arts.  And thanks to fiscal sponsorship from the guild, The Fussy Cloud Puppet Slam won a grant from the Puppet Slam Network and has had a consistent run of slams.  These slams have drawn diverse audiences and hosted out-of-town performers, and Fussy Cloud even collaborated with the Pacific Northwest Region of the Puppeteers of America to hold a full day of workshops that culminated in an open-mic of pieces made just hours before.
If we haven’t met, then let me introduce myself as your closest link to the Puppeteers of America Board of Trustees and also one of the co-founding producers of The Fussy Cloud Puppet Slam.  Please feel free to contact me with any questions about the organization or the slam.

Hi, PoPS members,
I’m excited to be starting my second term as the Pacific Northwest Regional Director, especially because it will be my first full term of two years.  I was re-elected at the Regional Meeting and Puppet Slam Workshop day in Seattle.  Thank you all for attending and making it a fabulous workshop event. Thank you as well to the wonderful hosts of the event: The Fussy Cloud Puppet Slam organizers.  This term, I’m hoping for a Regional Festival in our region because the last one (Puppet-o-rama) brought to us by you, the Puppeteers of Puget Sound, was so great!  I can’t tell you where it is yet, but you might think about renewing your passports…just in case!
As the Regional Director, I’m hosting a Meetup Group for the whole region at Meetup.com: http://www.meetup.com/The-Pacific-Northwest-Puppetry-Group/.  The current one is based in Seattle which is great for our guild.  I can make anyone an event host, so please contact me with your info if you’d like to be a host.  I plan to schedule events on Meetup for attending the shows in town, and this fall I’m going to host several workshops for hand-rod puppets (similar to Muppets).  I hope you will join Meetup and come!  There are also some plans in the works for a script-writing workshop.  Currently, you can sign up to attend the next Puppet Slam with us.  There is a discount for Guild members at this and other shows we will attend.  This is an exciting time to be a part of the guild so I hope you will renew now!

The Northwest Puppet Center has a museum, archive and library focused on the puppetry arts. Sigi the Antelope: Stories of West Africa  by Carter Family Puppets & Ocheami Oct. 13-28.  http://www.nwpuppet.org

Thistle Theatre opens their 20th season with King of Dinosauria created in part with a family grant from the Jim Henson Foundation. Oct. 6-28.  www.thistle http://www.thistletheatre.org

Fussy Cloud Puppet Slam will be on Halloween, October 31 at Theatre Off Jackson. It will be a spectacularly spooky evening of puppetry. Contact Gavin Cummins: gavination@yahoo.com

WHAT DOES THE GUILD MEMBERSHIP OFFER?

GUILD PURPOSE:
The Puppeteers of Puget Sound is a non-profit organization, which promotes and raises the standards of the art of puppetry through the exchange of ideas, programs and workshops.

MEMBERSHIP BENEFITS:
–      free workshop/events at meetings through the year
–      http://puppeteersofpugetsound.com

services including a link to your website
–      one online Newsletter (minimum one per year)
–      access to guild puppetry consultants
–      PPS business card
–      member discounts for special events
–      information about regional and national puppet festivals
–      access to PPS scholarships (if financially qualified)Mail a check to the address listed in the membership PDF.

Don’t forget this is the month to renew your membership or become a new member of our parent organization, The Puppeteers of America. http://membership.puppeteers.org 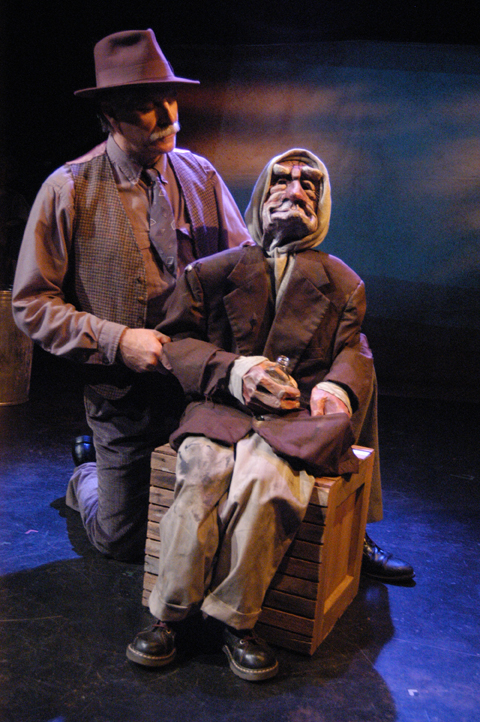 This Land | Woody Guthrie, adapted and directed by Greg Carter

from the drawing, writing, and music of Woody Guthrie

at the Erickson Theatre Off Broadway

(Seattle) – Following hard on the heels of a successful revival of Dario Fo’s Accidental Death of an Anarchist, Strawberry Theatre Workshop continues a season of agitation and propaganda with a second company classic, This Land | Woody Guthrie, a play for actors and puppets derived from the music, drawing, and writing of folk artist Woody Guthrie. Strawshop’s 2004 production of This Land was the first show in the company’s history.

Woody Guthrie would have been 100 years old this July. What would he have thought of the America we’ve made? Guthrie’s America, like ours, was embattled. His world, like ours, was rocked by brutal violence, tarnished by bigotry and divisiveness, and alienated by ostentatious wealth and bitter, abject poverty. Yet, his songs describe a patriotism rooted in a deep love for Americans and a resolute belief in the idea of America, battered though it may be. “In a single lyric,” says adapter/director Greg Carter, “Woody will tear your flag down and give you a reason to pick it back up.” In This Land, puppets inspired by the photographs of dustbowl photographer Dorothea Lange bring sculptural dimension to Guthrie’s messages of hope and activism, dignifying his archetypes just as he always sought to dignify and honor the ordinary Americans he sang about.

About our Vanishing Discount Pricing

Strawshop is introducing a pioneering new pricing model for this show: the vanishing discount. Every single seat will be discounted for every week of the run except closing week, with the discount starting at two-thirds off full price (or $10) during opening week and gradually “vanishing” (tickets for the second week will be $15, for the third week $20, the fourth $25) until closing week, when only full price ($30) tickets will be available. Strawshop hopes that these savings will encourage patrons to attend early in the run.

About the This Land Artists

Returning cast members from the 2004 production include celebrated director and performer Sheila Daniels (director of Strawshop’s Breaking the Code, TPS Gregory Award for Outstanding Director 2010 and 2011), and Clark Sandford (Book-It’s Prairie Nocturne). Edd Key reprises his role as Musical Director. The Seattle Times said in 2004: “Several dozen Guthrie songs are performed here with conviction and twangy beauty, under the expert direction of Edd Key. (A native of Kentucky, Key clearly knows this music in his bones.)”

Lighting design is by Jessica Trundy (2012 TPS Gregory Award nominee for Outstanding Lighting Design for Azeotrope’s Jesus Hopped the A Train, WET’s Crave). Sound design is by Evan Mosher (2012 TPS Gregory Award nominee for Outstanding Sound Design for Seattle Shakespeare Company’s As You Like It, Strawshop’s Accidental Death of an Anarchist, “Awesome” the band). Costume design is by Ron Erickson (Cornish Costume Design Area Head, Seattle Opera Wardrobe Head). The original puppets are designed by Greg Carter, Jenny Anderson, and Paul Chamberlain. New characters, designed by Carter and Katherine Stromberger have been added to the puppet company for this production.

Strawshop’s founding Artistic Director Greg Carter helms the production as adapter, director, and scenic designer. Carter learned puppets at In the Heart of the Beast Puppet and Mask Theatre in Minneapolis, where he originated This Land. Strawshop directing credits include Inherit the Wind, Gutenberg, An Enemy of the People, and The Laramie Project, for which he was nominated for a 2009 TPS Gregory Award for Outstanding Director.

Founded in 2004 by Greg Carter, Strawberry Theatre Workshop is a professional theatre company dedicated to socially engaged work of the highest caliber. Strawshop is a Stranger Genius Award winner, a four-time Seattle Times Footlight Award winner, and the only company to be nominated for a TPS Gregory Award for Outstanding Production every year since the awards’ inception in 2009. Strawshop is one of three companies selected to operate the new 12th Avenue Arts building, slated to open on Capitol Hill in 2014.

Thistle Theatre, a puppet theatre for families presents:  King of Dinosauria
Thistle Theatre, puppet theatre for families, presents King of Dinosauria – a show for all ages inspired by the comedy of the Marx Brothers. Children aged three years and up will enjoy spotting 7 types of brightly colored dinosaurs including a Groucho-inspired T-Rex.  Audiences familiar with the Marx Brothers will be amused by the classic humor.  The shows theme centers around fairness and the perils of cheating! Come join us to find out who will be the next King of Dinosauria and control the recipe for the coveted Choconutty Cocolates. Ben Burris, Brian Stabile and Gina Wilhelm are the puppeteers directed by Jean Enticknap.  Puppets designed and built by Brian Stabile, who also wrote the music and songs for the production. The production is funded in part by a Family Grant from the Jim Henson Foundation and sustained support from 4Culture King County Lodging Tax.

Gina Wilhelm, Ben Burris and Brian Stabile and puppet with their base coat paint